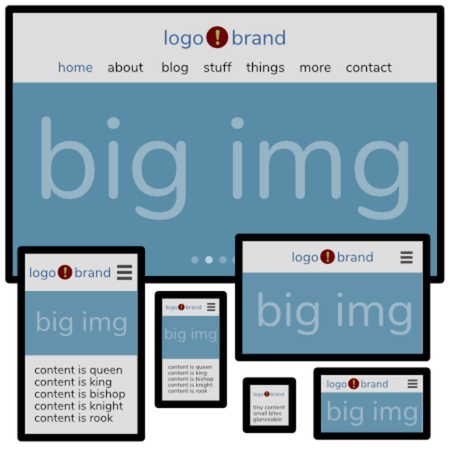 It's never as simple as this.

The pages you put online - they aren’t just a business necessity. They’re not just points of commerce or an advertisement. They are a key element of your brand. It’s part of your identity, and it’s what you want to say to the world. Your site should look just the way you want it to, and it should be wholly yours, not based on something available to everyone else. It is unique. It is particular. It is professionally designed. It can’t come out of a one-size-fits-all box.

Now, think about how you want your website to respond when you’ve got a new idea. Chances are, it’s a lot like how you want things to work in the rest of your life. When you’ve got something to say, you don’t want to wait on anyone else’s schedule to say it. Timing means a lot. It can mean everything. When it comes to making website changes, you want control. The power should be in your hands.

Slab is built upon these principles. You should be able to craft and change your website whenever you want — without needing to first learn how to code. You should be able to add new words, photos, audio, video, products, and ideas — quickly and simply without spending your time in generic a back end admin area. Just click and save. It’s done.

And what you create online should represent you, and only you. No templates. No out-of-the-box designs. Your website. You.

This is Slab. Information made beautiful. Slabmedia puts the art of the website in your hands. 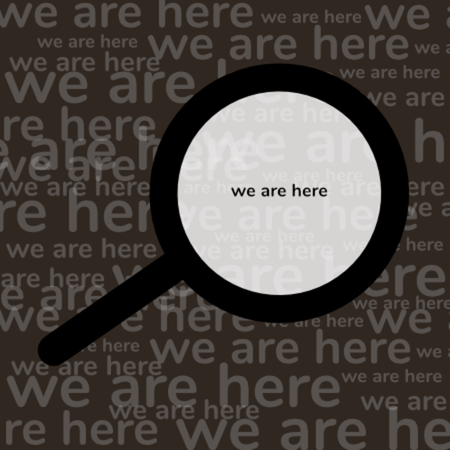 okay, but what now?

You need a brilliant design to retain & convert.

Organic SEO is important. Being on the first page of google for search terms your audience will use to find you is important. Leveraging directories and location searches are important to being found, but what happens once your site is found?

You need to be able to tell a compelling and clear story, combined with style and structure to turn those hard earned searches into results.

Your key goal may be a signup, it may be a sale, it may be a contact, or something else, but without a comprehensive, informed approach to guide your visitors to the goals you want, you risk wasting all the time and capital you've put into search engine performance once people land on your site.

This is where the expertise at Slabmedia can be a key part of your strategy. First you need to weed out visitors who are a bad match for what you offer. This requires clarity of communication, both in design and in language so that you don't end up with too many contacts and too few prospective clients or customers. Next, you need a strategy that will first educate, and then convert. No on wants to fill out a form before they know you. The job of a high performing site is to provide the information first, before presenting the ask. Finally, it should all be done in a way so that the visitor is driving the process. A website is not a magazine or television ad. It is key to keep the navigation and information architecture open and clear so that the visitor can explore and get answers to their questions. Once they have determined that you offer what they need, they should have a clear path to getting it.

We help you get found, but more importantly, we help your visitors find what they are looking for. That is the advantage of a Slab site, and the Slabmedia process. 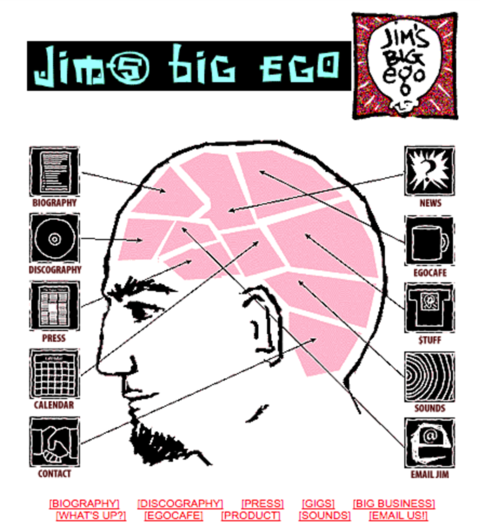 Jim's very first website in 1997: back when screens were really just this size in pixels.

Your site is a living thing.

Slab is an aesthetic tool. It was born out of an artist’s effort, and its potential, it was first realized by creative people just like you.

The story starts in 1997. Jim Infantino; the founder of Slabmedia, was working on a website for his band. As a graphic designer, he had a sense of aesthetics. As a musician, he has a vision for what his audience would want from a band’s site. Jim wanted to bring the concept of a dynamic web presence into the world of his music, and his band’s music into an environment that felt like the band sounded, online. What he created turned out to be remarkable. And it turned out to be the kernel of Slabmedia.

He won a New England Web Design award for what he built, but the light bulb really went off when other musicians started asking him for something similar to what he’d done. They wanted sites just as personal, packed with the same sense of individual identity and fun.

Jim thought the ideas they were bringing sounded great. But he didn’t want to be a webmaster to a dozen clients as their careers demanded future changes to their sites.

“A musician is a traveling salesperson,” Jim says. “I needed to build a system for them to update their content easily from anywhere and on a budget.”

Jim had a vision. He wanted website creators to be able to craft their own pages to suit their goals, but he wanted them to then be free to add and change them without needing anybody else in the mix. In 2002, he began to build the interface that would turn into the Slab.

"I taught myself what I needed to know to build our Slab web publishing platform from the ground up, while maintaining the perspective of the designer, working for a demanding client, on the move,” says Jim. “This has made our system more robust and more user-friendly and over time, highly flexible for many kinds of clients.”

If you think about what he built, now more than a decade and a half down the road, Slabmedia provides website software that works a lot like a musician's setlist. The sites that Slab enables are structured and designed to engage an audience, but they are also flexible and quick to respond to the needs of the moment.

"I think of a site as a living thing," Jim says. "It starts as a framework of design and structure, and then grows and deepens with content."

And because the system is self-organizing, your website evolves as you add to it, but it never loses its original sense of coherence. It won’t turn into a jumbled heap of stuff. The end result is a site that remains coherent not only to you but to your visitors, turning searches into results. 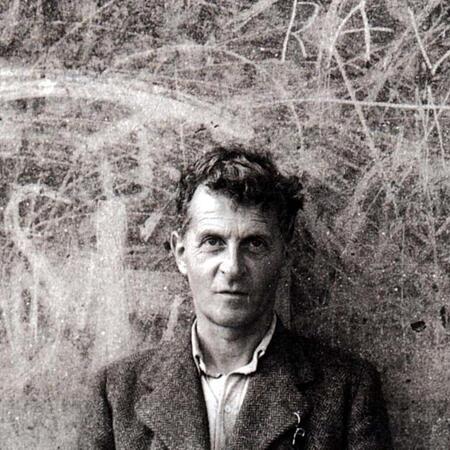 “Because if you shout ‘Slab!’ you really mean: ‘Bring me a slab’.” Ludwig Wittgenstein

How did we choose our name?

The language-game of the web

I wish it was an easy answer.

In the early part of the last century there was a revolutionary philosopher named Ludwig Wittgenstein. One of his major assertions (if you can call them that, which you cannot) was that language is a game. Our words do not have specific, direct referential meaning, rather they are like pieces in a game. We try them out, we communicate because the pieces as they are used have effects, which are themselves, pieces in the same game. Words are defined only by their use, not their definition or meaning. His work was controversial, and misunderstood by his peers, but have become the foundation of much of modern thought.

When we were starting this business in 2002, it seemed to us, even at the early stages of the web, that it was a new dimension in this language game. It has been said by many web visionaries like Jeffrey Zeldman, that the web is a revolutionary change in human thought in the same way as the Gutenberg press was. We saw the web as an extension of the principles Wittgenstein first discussed in the 1920s and 30s.

In his notebooks, which were posthumously published as “Philosophical Investigations,” Wittgenstein used an example of masons or stoneworkers asking about a pile of stones:

2. ... Let us imagine a language ...The language is meant to serve for communication between a builder A and an assistant B. A is building with building-stones; there are blocks, pillars, slabs and beams. B has to pass the stones, and that in the order in which A needs them. For this purpose they use a language consisting of the words ‘block’, ‘pillar’, ‘slab’, ‘beam’. A calls them out;
--B brings the stone which he has learnt to bring at such-and-such a call.
--Conceive this as a complete primitive language.

19. It is easy to imagine a language consisting only of orders and reports in battle.
---Or a language consisting only of questions and expressions for answering yes and no. And innumerable others.
-----And to imagine a language means to imagine a form of life.
But what about this: is the call “Slab!” in example (2) a sentence or a word?
--- If a word, surely it has not the same meaning as the like-sounding word of our ordinary language, for in (2) it is a call. But if a sentence, it is surely not the elliptical sentence: “Slab!” of our language.
-----As far as the first question goes you can call “Slab!” a word and also a sentence; perhaps it could be appropriately called a ‘degenerate sentence’ (as one speaks of a degenerate hyperbola); in fact it is our ‘elliptical’ sentence.
---But that is surely only a shortened form of sentence “Bring me a slab”, and there is no such sentence in example (2).
---But why should I not on contrary have called the sentence "Bring me a slab" a lengthening of the sentence “Slab!”?
---Because if you shout “Slab!” you really mean: “Bring me a slab”.

Obviously, it's confusing, as any good work of philosophical thinking is. However, we felt it was a perfect representation... oh no, not a representation at all, but a metaphor (and what is that?) for the emerging web.

We also saw the emerging web as the future of all media, and on that, I think there is now no argument.

So, not an easy explanation, but that was what we were thinking at the time. And now, it is only just what it is.